I’m a founding member of BaseWatch, a community organisation in Darwin that formed in response to the 2011 announcement that USA Marines would be based in our town. We’re a member of the national umbrella group, IPAN – the Independent Peaceful Australia Network. We share IPAN’s concern that hosting USA bases in Australia makes it impossible for us to avoid being dragged along on whatever mad misadventure the USA militarists dream up next.

But we recognise a responsibility to prioritise local concerns about social impact. Foremost among these is the real risk of assault by visiting servicemen – a reality that is well know, but barely acknowledged by those best placed to lead risk management.

I was prompted to share with you some thoughts on that topic by an article in the local paper last month that sought titillation from anecdotes of the recreational exploits of marines on previous rotations. Taken in isolation, that column might have struck those of you used to reading news from a serious broadsheet as a little inappropriate. In the spirit they’d like to be received, it’s just another dose of irreverence and larrikinism that Murdoch’s limited news insists is what the public in the NT really want. But from within the context of a propaganda campaign that denies any debate, let alone dissent, about the growing foreign military presence, this column begins to smell more like betrayal.

I’m going to share it with you in all its glory, but first there’s a few things you need to know about 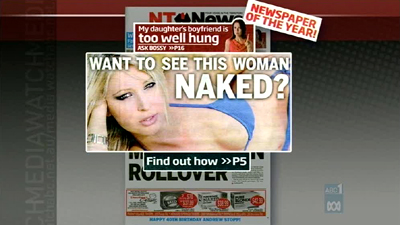 It seems even those who mock its low-brow pastiche of tabloid journalism, can’t help enjoying the satire and absurdism. And just what they get away with.

I’m sure it’s all more fun for those who have a more useful daily paper. Those of us with no alternative to rely upon can feel a little desperate. In between the crocs photos, UFO sightings and flying dildos, the paper indulges over-egged Territorian jingoism, asserting a confused definition of local identity based on iced coffee and fire crackers. Once they’ve satisfied the needs of the advertisers, not least of which NT Government, there’s little space left to empower Territorians to explore and interrogate our political and social realities. Editors predictably insist they ‘play a straight bat’ at political and social issues, but some would say the paper has a politically conservative orientation.

So the local paper is as bad as Merde’och gets in Australia - perhaps no worse today than back in 2011. I guess it’s understandable the paper simply ran the leaked announcement of Marines in Darwin verbatim – cynical as it was, on 11th November, Remembrance Day. The following month, with President Obama poised to visit Darwin to make the formal announcement, the paper refused to run a classified ad for protest, on the grounds that it was 'disrespectful'. 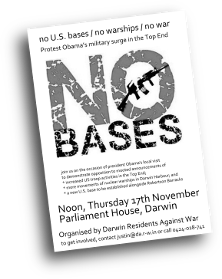 On the day he arrived, the paper printed a commemorative double-page spread designed to be folded as a paper hat. 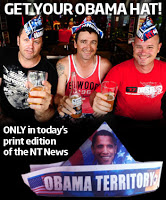 The paper did nothing to facilitate community response to this unprecedented change to our town, and enthusiastically promoted the initial small of a couple of hundred young, fresh-faced marines on their (rightly) self-described ‘diplomatic mission’. A consistent smiling, shiny PR campaign was waged in its pages.

Since then, the paper has dutifully and succinctly reported on two assaults committed by visitors, and has reported the delays caused by disagreement between the two governments over just how much of the billions it is estimated to cost to base the Marines in Darwin will be covered by the visitors themselves. But still no useful consideration of the impacts that any reasonable person might anticipate from this unprecedented new agreement.

So, I already wasn’t actually pleased with their role.

But then we saw this: 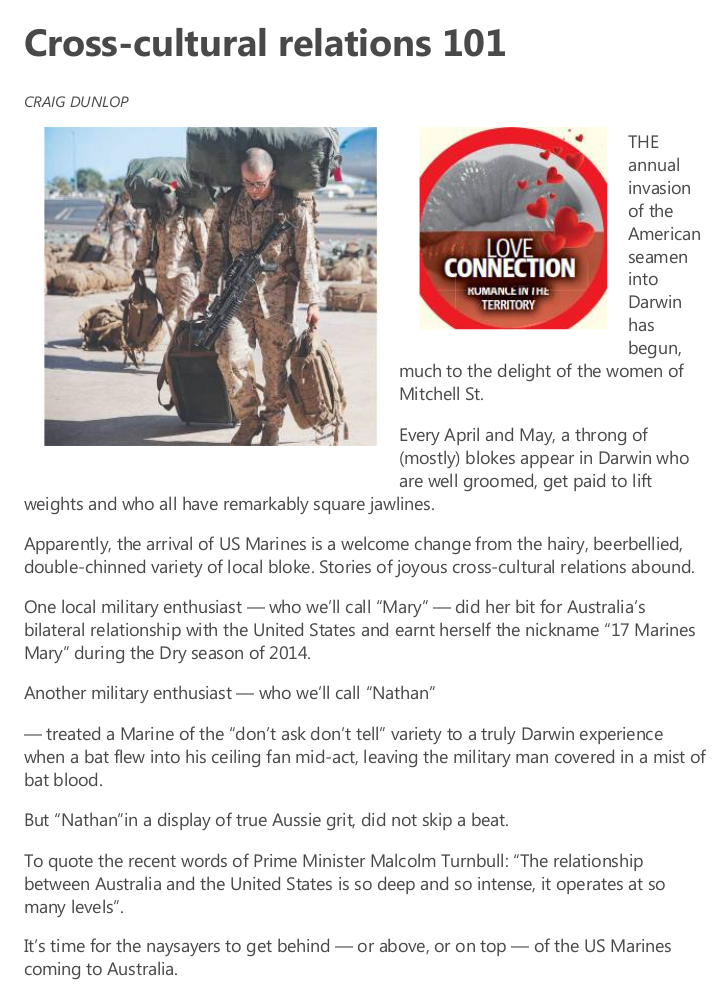 Now, I know from recent conversations, some people find the gratuitous details of ‘joyous cross-cultural relations’ inappropriately crass. Some have suggested to me it is disrespectful to describe these anecdotes. Well, maybe. It’s certainly unnecessary. But it’s really the context – an unacknowledged increased risk of sexual assault by visiting servicemen, illustrated by recent and historical experience of sexual assault by visiting servicemen – that makes this article encouraging locals to ‘get behind … or on top of.. the US Marines’ so objectionable.

A history of assault

Darwin does have a history of crimes, including assault, by visiting foreign servicemen.

The Poinciana Woman, (re-)named after the trees that grow on the coast near a WWII USA base, is a localised re-telling of the Malay myth of the Pontianak (woman who died in childbirth) : a story found all around south-east asia. In Darwin, the soul-sucking ghost is given her origin as the victim of rape by one of the visiting American soldiers based there during WWII.

Local activists have compiled a register of known assaults over the past 20 years. One of these, involving two young teenage girls, is painfully described in Tess Lea’s beautiful manuscript ‘Darwin: secret life of your city’. These known incidents assemble a description of known flaws in the existing treaty system, that allow offenders to evade local law.

When the first rotation of Marines arrived, they were announced as a self-described diplomatic mission, and by all accounts performed the role expertly. Their main activities were posing with wildlife, kicking footballs with primary school kids, sitting on stalls with local charities, and even trying to survive a community ‘fun run' in the year’s worst week of oppressive sub-tropical humidity.

But the following year, the second rotation of marines coincided with the bi-annual Talisman Sabre wargames, and thousands of Americans passed through Darwin. It was during a weekend’s R&R, on the tightly packed entertainment strip of Mitchell St (where, you’ll note, Mr Dunlop reports the women are delighted to meet foreign servicemen) that a group of friends met a visiting sailor who had sex with one woman, then allegedly assaulted another later that night.

When the victim reported the assault, a well-trained machine sprang to action. The commander of the Marines was quick to gruffly assure local sexual assault service providers that the alleged culprit was a sailor in town for wargames, not a marine on rotation. The USA Staff Justice Advocate made immediate representations to the Federal Attorney General, requesting that the USA Military be given carriage of the allegations through the military justice system. To his credit, and probably in the interests of the USA PR campaign, George Brandis denied the request. Despite evidence of a subsequent apology on social media, the sailor was eventually acquitted in local court.

Darwin locals were concerned to learn that the the Americans had requested this incident be dealt with outside of Australian law. Questions about jurisdiction over actions by visiting servicemen are nominally covered by the Status of Forces Agreement (SoFA) – an outdated WWII treaty instrument that has failed to adequately protect Australians in the past. The action from the consulate in Melbourne was based on a provision in the SoFA that bizarrely requires the Attorney General give ‘sympathetic consideration’ to any request to waiver Australian jurisdiction. Upon public inquiry, the consulate confirmed that their request was made as a matter of course, and will routinely be submitted for future similar incidents.

The next publicly reported assault happened two years later, also during war games, but this time it was a Marine who was taken to court in Darwin. Although the assault was an act of violence, in an argument over paying for a massage, the defence implied that the services were sexual. Although neither the victim (who claims she was thrown to the ground) nor the accused (who didn’t fully remember his drunken itinerary) recounted any sexual component of the unpaid massage service, defence hinted at an additional charge on the receipt. Again, the alleged offender was found innocent by a local court.

These two court cases are the only publicly declared instances of assault. But a recent report by two investigative journalist from the ABC, who diligently pursued leads through Freedom of Information over a six month period, paints a picture of other alleged incidents where ADIS (the Australian Defence Investigative Services) have intervened to convince victims not to proceed to court. An article, by Dylan Welch and John Stewart, referred to three cases - described variously as “unwanted sexual advances”, “inappropriate behaviour” and “indecent assault” - none of which were trialled under Australian law.

In this context – a history of assault, sexual and violent, both before the arrival of Marines and since – that the local paper chose to print an insulting article that encourages the people of Darwin to meet the Marine deployments sexually.

To be fair, that’s not the first insult we’ve heard on this topic. When the Marine deployments commenced, locals were promised a full Social Impact Assessment ahead of Australia signing the Force Posture Agreement, that locks us in to 25 years of this new relationship. Ultimately, the Agreement was signed before an Assessment was made on the full scope, however two preliminary studies were conducted, scoped to each of the first two deployments only. The first rightly identified the increased risk of sexual assault by visitors as one of only two significant risks (the other being unrealistic expectations of economic benefit). The second, however, displayed mathematically modelling which proved, so they plainly told us, that it was more likely that locals would rape marines!

Despite the nonsense from these consultants, and the drivel in the merde’och paper, some sensible voices remain. Local advocates continue to recommend simple, achievable steps that can better address these real risks. First of these is the straightforward suggestion that local sexual assault service providers be engaged to conduct nationally credited training for the visitors. The Marines do require all their personnel to view a DVD on the topic, however experts suggest that training to Australian standards might be more appropriate.

Secondly, not quite so simple, but certainly achievable, is review of the Status of Forces Agreement. This proposal was first raised by former-Senator Scott Ludlam, who was questioning defence officials in Senate committee hearings just months before the initial deployment arrived. Ludlam’s questions were received in shouty indignation and demands of apology for what Lieutenant-General David Hurley said was “a slight on the US Marine Corps.”

This recommendation has been dismissed one way or another wherever it is raised, but it’s really not a bad idea. It’s not unusual to review treaties before they are more than 50 years old (this one is dated 1963). We deserve a tool that is fit for the very new relationship that the Joint Force Posture Review demands. A public review would offer an opportunity to close loopholes that have been identified as allowing recent crimes committed by visitors to go inadequately met by local law – collective movement orders that obfuscate identity, creative interpretation of ‘in the course of duty’, and the perverse provision for ‘sympathetic consideration’ of any request to waiver jurisdiction. But perhaps more importantly, a full public review would give all parties – including locals and visitors – greater confidence and certainty about our shared expectations for this evolving relationship.